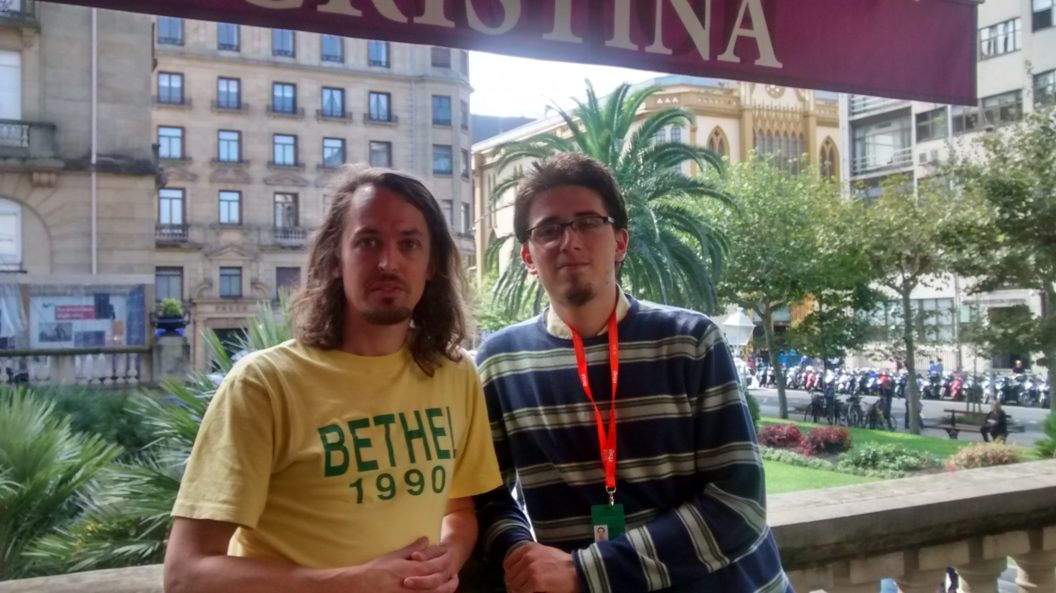 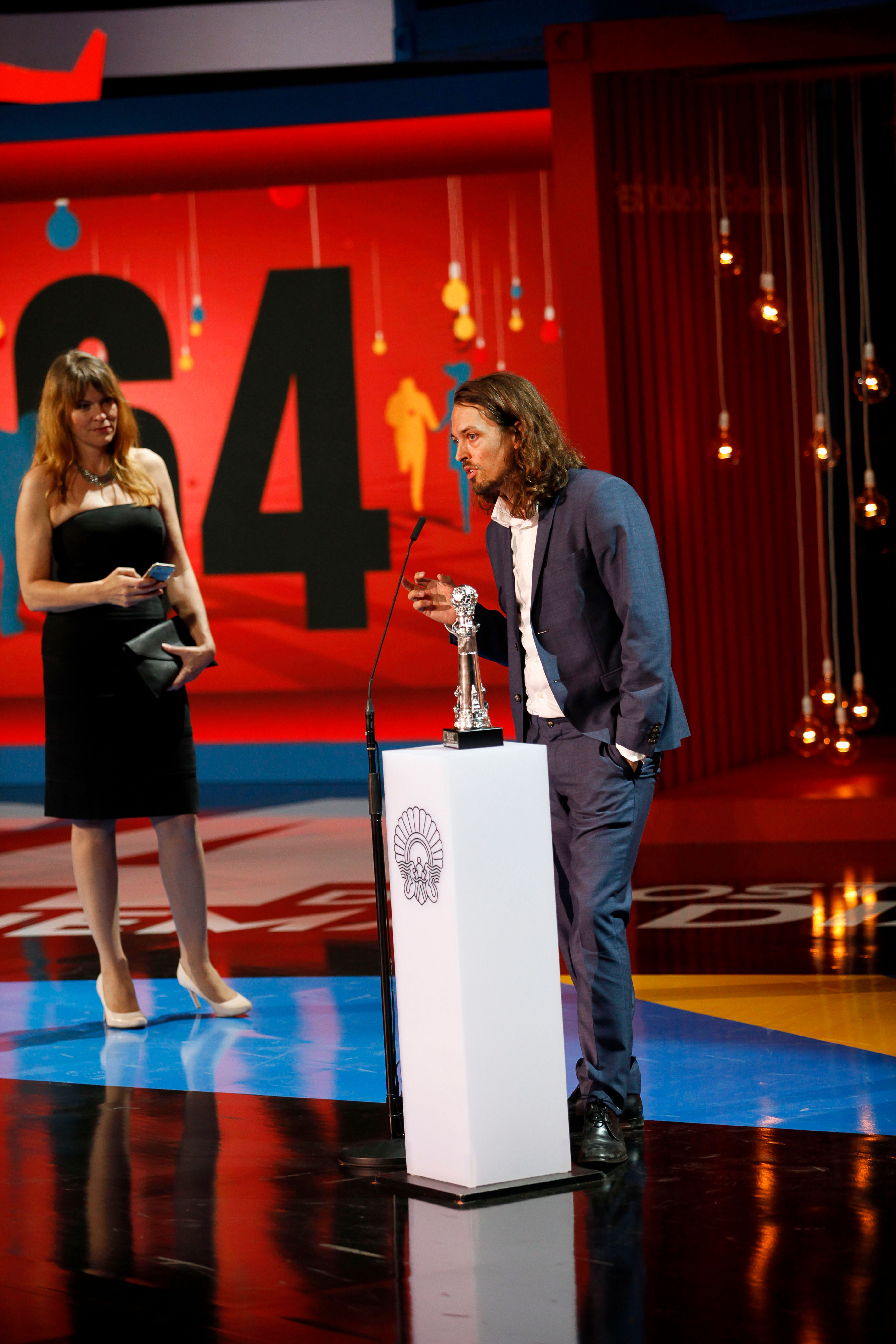 This is a really fresh movie. Very original, I think. Different, unique in his own way. And is not only unique, but kind of a risky movie, maybe. I think that making a movie with these kind of process might be really difficult. Difficult not only in the making, but also in the selling, which is a really hard task and I congratulate you for that. It really has some interesting things. First of all, What were your most immediate references, either cinematic, cultural or whatever?

Most of my references are personal experiences. People I meet, thoughts that came out in my mind…I had a dream while having fever, when I was a kid, which was really recurrent at times. I had memories of this happening when I was four years old, and it felt vey surreal. I saw myself kind of trapped in another body. I was looking at my body, lying in bed with this fever, and seeing my hands and arms, but they didn´t feel like me. If I moved, those arms and feet moved, but it felt like totally alienated to me. I looked at the world from a distance, like a binocular turned all the way around. I saw the world out there, but I couldn´t communicate with it. I tried to capture that emotional state, giving that to the main character in this movie. He is alienated from the society in this movie. He has a filter between him and the rest of the world. And I wanted it both to look like that, I wanted the physical state to look like that mental state. He should travel between his inner life and his outer life, through this distorted, alienated, psychological state.

We can say that this whole idea about the isolation between the person and his own body and the society was there even before the character of Ricard, based on a experience of yours, and then you translated into Ricard and his character?

Exactly, you said it better than me. (laughs)

Another question related to Ricard: I saw the film yesterday, in the Kursaal, and I´m not sure but I think the actors were there. And I think one of them was the actor who plays Ricard. And I was surprised to realize that he is not really disabled, that it was just make-up. Did you make a casting trying to look for a person with this physical circumstances, or did you want from the beginning this particular look with the big head, which has a great resemblance with The Elephant man, so therefore you made it with make-up, or did you look for a real person?

Yeah, when I do the casting process I usually try not to make up so many borders, frameworks to minimize the scope on people that I can cast for he movie. I was looking for a really, really special person, that had experienced what had to do with the character, he had to understand him, he had to have been in that world, to be close to Ricard, in a sense, with the history of his life. That was what I was looking for, we were seeing the possibility of having a person that looked like that, we found someone that looked a little bit like that, he was blind, and then I had the idea, which I wrote in the script, that Ricard should be blind as well. But then, when I met Christian, who plays the main role, it took me three seconds to see that he was the person. He looked like he had it. It was like a medical experience  After that, it was so easy.

Also referring to the aspect of Ricard, that I think resembles a lot The elephant man, do you think the relationship between those characters is just physical or is there another reference while constructing the character process?

In the construction of his physical look, his face is made up. It´s Christian´s body, but I wanted a face that fits his body, that would be believable for him as a real person, I wanted it to be real to the psychological state that I wanted to recreate. I love he elephant man, but I wasn´t inspired by it, although it looks like him. It was just the idea of giving this physical manifestation to that psychological state, which I had when I was really young. Me and the make-up artist were molding it together and trying to develop the character.

I think that one of the most interesting aspects from the movie, from a visual point of view, is how we see the world from the circular point of view of Ricard. And there are two differences between how the real Ricard sees the world and how the Giant sees the world. They both see with only one eye, but the real Ricard has a blurred vision of reality while the giant doesn´t. Was this a way to give the giant his own way of seeing the world ?

I think is good for the movie that you don´t know that they are, in a way, the same person. It builds up to trying to convey a feeling that I want to hold back in the film. The film is about a big character which is also really big, and Ricard has the vision of a person which is trapped in a small world. But the giant is totally free, he can do whatever he wants, he is fifty meters told, no one tells him what to do.

So it really fits the character to feel free, to have this great power but at the same time being very short and very humble. 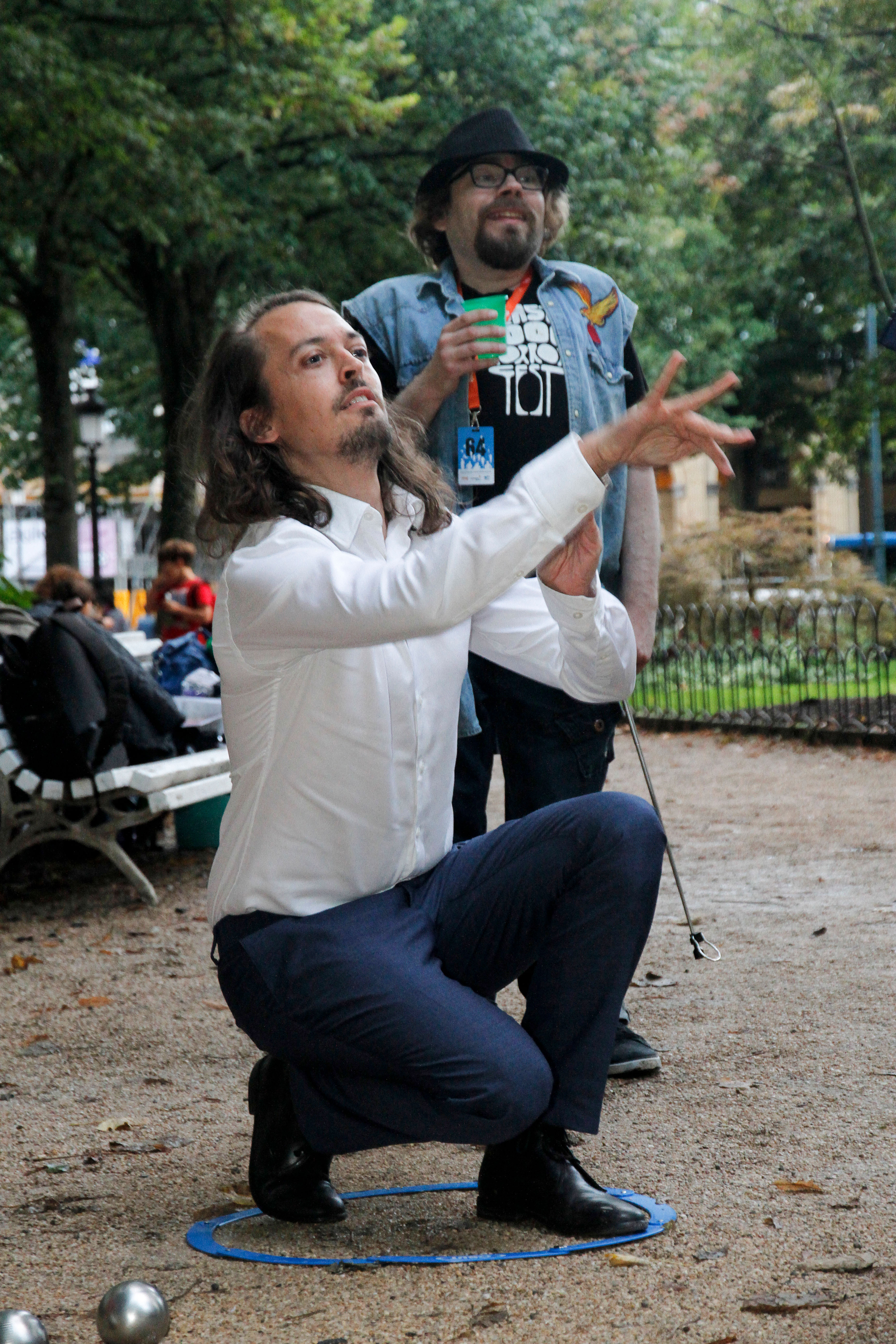 The bowl game was in the project from the beginning, or it came later as a challenge to give to the character of Ricard, making for him a path of self-superation and showing that he can make this kind of sacrifices?

This started, actually, in many ways. I made a music video for an artist called The tallest man on Earth. I couldn´t take his name and made it about the giant and his mental landscape. But then I wanted to develop that story, and I wanted it to be contrasted with a real environment. And then this character grew up from that. I´ve been playing petanque from many years myself in the club, I´m fascinated with that world, it is kind of an outside world in itself, the petanque community. You don´t see that many people playing petanque, is often hidden in the outskirts of town. And Ricard is an outsider in itself, being disabled, being very strange looking. He´s an outsider playing an outsider sport in an outsider community, in a way. If you´ve played petanque, there´s so much in this sport that is important for the theme of the movie. When you make the perfect shot, for a ten meter distance, shooting a ball that comes exactly, by centimeter, where you wanted it to come, is kinda impossible to do it, and when you do it it feels like magic, like if you are a conjuror. I wanted Ricard to be like a magician, because he has such a strong will that he can actually transport the ball to an specific spot. He has this magical element that´s important to the theme of the movie.

This is a movie that mixes genres, because it is mainly a social movie but it also plays with the fantastic genre. ¿Do you think this mixture will make it more accesible to the audiences or make it difficult for the broader people to like the movie?

To define a film with a genre is a way to prepare the audience for what kind of film they´re going to see. This is an action movie, and you expect something to happen. In this film it doesn´t really make sense to say that it is a sports movie, or a western movie, or a social drama , or a slapstick comedy. It has all of those, is a surrealistic saga, I wanted it to be complex. And I´m playing around with genres, a lot. I really hope to make something that is recognizable to people, and help them to feel at home. You recognize all this elements, flowing to the story in a good way. I like to mix things up and create something unexpected.

The most difficult thing must have been to capture the tone, and I think it has a very vivid one, a lot of will of life. Is a very optimistic movie, and that´s not always easy to express. It can sometimes feel excessive, or provoked. But this movie feels organic. Can you tell me a little bit about the character of the mother, about her psychology and the problems she had in the past that kept her away from Ricard, there´s enough information for you to guess, but can you explain it a little bit?

I wanted to portray the mother as a person tied together with Ricard by invisible threats. They´re both outsiders from different perspectives, they communicate by sharing the same dreams, and it helps them to come together. Is important for me to keep a lot of the enigma, the mystery, unspoken, as they are both kept out from society for different reasons. They have a very limited space. She hasn´t gone out from her apartment in years. you can feel that she´s so vulnerable and so sensitive that she won´t let anyone in, she won´t have any eye contact with people. She´s so fragile, and has her sensors outside of her body, in a way. She´s been hurt in the past, and she´s afraid to attach to anyone and for it to happen again.

Can you explain us a little bit about the creative process of making the music? The theme of the end is a very whistling and catchy song, and it stays in your head for the next minutes

The music is from one of my favorite musicians, called Björn Olsson, and I´ve been listening a lot of his music. While working on my other films, from a lot time ago I´ve always had that music on repeat in the background, it just helps me to come into a certain mood. I trie for a long time to convince him to make music for a film of mine, and this film felt so perfect for him. Almost all of the music was composed for this movie, and I felt that I should make a step backwards and give him a lot of freedom, he should feel everything was possible before narrowing it down. We followed a general theme for the movie and made variations to it. It was important to have fun during this process, and talk about the movie in his studio, or his house… I´m not responsible from anything of his work.

Thanks a lot for your time.